Meckel’s Stoma formation is an important aspect of many colorectal operations both in the emergency and elective setting. It allows for the diversion of gastro-intestinal contents and provides protection for distal anastomosis. Stomal and para-stomal complications may present acutely on the emergency surgical take or seen in the outpatient clinic.

We present a case of a 51-year old female admitted to the hospital with lower abdominal pain and found to have a discharging peristomal lesion on the background of previous extensive surgery for ovarian cancer.

Colonic resection with or without stoma formation is performed for various reasons in the elective and emergency setting. In addition to colorectal surgery it may be necessary to perform this procedure in other specialities including gynaecological and urological surgery. As a consequence stomal and para-stomal complications may be encountered during the acute surgical take as well as in the outpatient department. These include stomal/peri-stomal bleeding, para-stomal herniation, stenosis, retraction and prolapse. In addition to these, clinicians need to remain vigilant of rarer complications and presentations associated with stoma formation. In this case report, we highlight an interesting and rare occurrence of refractory ovarian cancer presenting as para-stomal metastases.

A 51-year old Caucasian lady was admitted under the physicians with a several day history of lower abdominal pain and was diagnosed and treated for a urinary tract infection (UTI). She also complained of a discharging peristomal swelling.

Her past medical history included advanced ovarian cancer for which she underwent a laparotomy and palliative de-bulking surgery under the care of the gynaecologists in November 2018. As part of this operation for disseminated squamous cell ovarian cancer a sigmoid resection and end colostomy were performed. Following a good post-operative recovery she was treated with adjuvant chemotherapy.

On this admission, the patient complained of a small, persistent discharging sinus peristomally and was unsure of its exact duration (Figure 1). She had received multiple courses of antibiotics in the past to no effect. Given her past surgical history an urgent computed tomography (CT) scan of the abdomen was organised. This showed multiple intraperitoneal cystic lesions/deposits with further cysts seen encasing the end colostomy in keeping with metastatic disease. The CT scan also found progression of the patients known peritoneal disease (Figure 2). 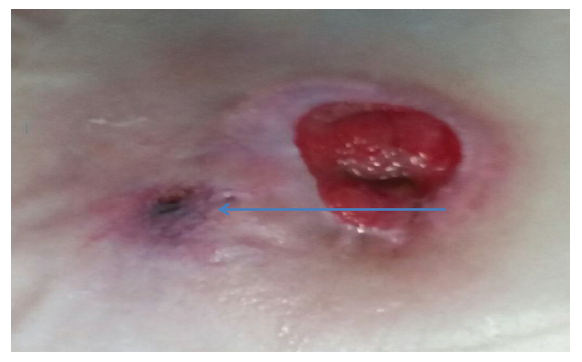 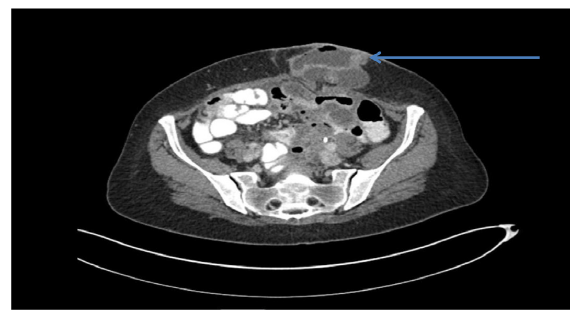 The patient was informed of these findings and referred to the hospitals palliative care team. Once deemed medically fit for discharge she was sent home to complete a course of oral antibiotics for her UTI and an outpatient clinic follow-up with the gynaecologists was arranged.

Due to disease progression despite receiving first and second line adjuvant chemotherapy, a multi-disciplinary (MDT) discussion concluded that best supportive care was appropriate to further manage the patient’s condition.

Squamous cell carcinoma (SCC) is a rare ovarian malignancy with an incidence of less than 2% [1]. It generally arises from a malignant transformation in a mature cystic teratoma and less often in endometriosis or Brenner’s tumour. These malignancies are often asymptomatic so presentation is usually at an advanced stage. Symptomatic patients may present with vague abdominal/pelvic symptoms and per vaginal discharge [2].

Cutaneous metastases, although rare have been reported in up to 10.4% of all solid-tumour malignancies. They appear as skin nodules of varying colour and often their growth is rapid and persistent. They usually signify wide-spread, advanced disease but less commonly can be the initial manifestation of an internal malignancy [3].

Metastatic cutaneous nodules are often firm on palpation and persistent despite multiple courses of antibiotics. Although abscess formation and infection would be more common a low threshold should be maintained particularly in those patients with a history of malignancy and when the nodule(s) is associated with a surgical site (such as wound, stoma). They may of course be primary cutaneous cancers.

Cutaneous metastases are seen more commonly in melanomas and breast cancer. It occurs in a reported 3.3%-3.5% of women with ovarian cancer of which serous papillary adenocarcinoma, endometrioid carcinoma and mucinous carcinoma are the usual subtypes [4].

Diagnosing cutaneous metastases is useful to aid prognosis and helps to guide the overall treatment goals for patients despite being associated with poor outcomes. Reported median survival times in ovarian cancer with skin metastases is approximately 4 months (range: 2-65) [4]. Treatment options in such cases, although mostly futile includes surgical excision, radiation therapy, and intra-lesional chemotherapy or immunotherapies.

A number of factors have been described as possible causes for port site metastases following laparoscopic surgery. Amongst these include primary peritoneal disease, presence of ascites, biologically aggressive disease, and surgery related factors including tumour manipulation and wound contamination [5]. By extension these mechanisms may also contribute to cutaneous metastases following open surgery.

‘Oncotaxis’ is a process in which otherwise dormant tumour cells may be distantly attracted to sites of tissue inflammation, such as surgical wounds, thus initiating local cancer recurrence. This has also been proposed as a possible mechanism for distant tumour metastases [6].

Although uncommon, surgical site metastases are an important differential diagnosis to consider in patients presenting with persistent and enlarging peristomal/cutaneous swellings and nodules. Early imaging is advised, especially in high risk patients with a history of malignancy, not responding to conventional treatment like antibiotics. Although the scope for treatment is often limited usually due to advanced disease, an early diagnosis in such cases allows a robust management plan to be formulated and discussed with the patient.

Copyright: Zaman S, et al. ©2019. This is an open-access article distributed under the terms of the Creative Commons Attribution License, which permits unrestricted use, distribution, and reproduction in any medium, provided the original author and source are credited.

An Atypical Presentation of Giant Meckel’s Diverticulitis: A Case Report

Open Access by Magnus Med Club Ltd is licensed under a Creative Commons Attribution 4.0 International License. Based On a Work at magnusmedclub.com